Brandalism: 600 ad takeovers in Paris before the COP21 Climate Conference

Two days before the launch of the UN COP21 Climate Conference, 600 posters were installed by the Brandalism project in outdoor media spaces across Paris. 82 Artists from 19 different countries made artworks to challenge the corporate takeover of COP21 and to reveal the connections between advertising, the promotion of consumerism and climate change.
Amidst the French state of emergency banning all public gatherings following the terrorist attacks on 13 November in Paris, the Brandalism project has worked with Parisians to insert unauthorised artworks across the city that aim to highlight the links between advertising, consumerism, fossil fuel dependency and climate change.
The artworks were placed in advertising spaces owned by JC Decaux - one of the world’s largest outdoor advertising firms and an official sponsor to the COP21 climate talks.
Other prominent corporate sponsors of the climate talks such as Air France, GDF Suez (Engie) and Dow Chemicals are parodied in the posters – whilst heads of state such as Francois Hollande, David Cameron, Barack Obama, Angela Merkel and Shinzo Abi also feature. The artworks were created by over 80 renowned artists from 19 countries across the world including Neta Harari, Jimmy Cauty, Banksy-collaborator Paul Insect, Escif and Kennard Phillips – many of whom featured at Banksy’s Dismaland exhibition in England this summer.
Joe Elan from Brandalism said, “By sponsoring the climate talks, major polluters such as Air France and GDF-Suez-Engie can promote themselves as part of the solution – when actually they are part of the problem.” 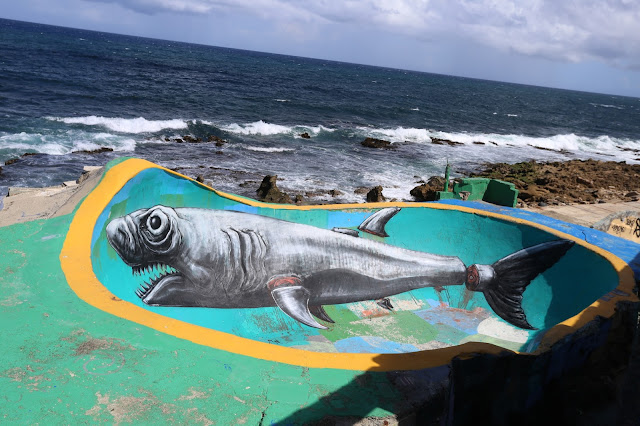 As a wrap up of his productive residency in Puerto Rico with JUSTKIDS, ROA dropped one last piece at the iconic bowl of La Perla. La Perla is a historical community astride the northern historic city wall of Old San Juan, Puerto Rico, stretching about 650 yards along the rocky Atlantic coast.
It took ROA just a few hours to create this impressive mural which raise the shark finning issue with this large shark and his sliced fins.
Shark finning is the practice of slicing off the shark’s fins while the shark is still alive and throwing the rest of its body back into the ocean where it can take days to die what must be an agonising death. Some sharks starve to death, others are slowly eaten by other fish, and some drown, because sharks need to keep moving to force water through their gills for oxygen.
Continue reading for more images and then make sure to talk to your friends about shark fin soup and remember: Friends don’t let friends eat shark fin soup! 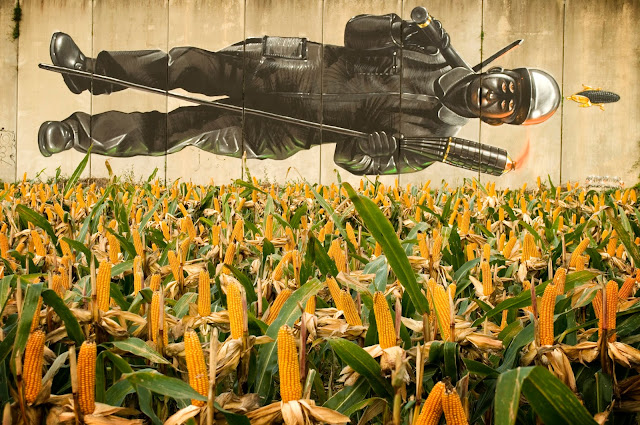 The Desordes Creativas Festival recently took place on the streets of Ordes in Spain where a brand large new mural by SPOK was just wrapped up.
The talented artist worked in a corn field to create this majestic piece of work entitled "Mining Galician Father" which is showing a large representation of a rather weird miner painted using different grey shades.
Hit the jump to discover more images from this unique artwork and then make sure to drop your two cents down in our comments section.

"Climate 01" a project by Andreco in Paris, France 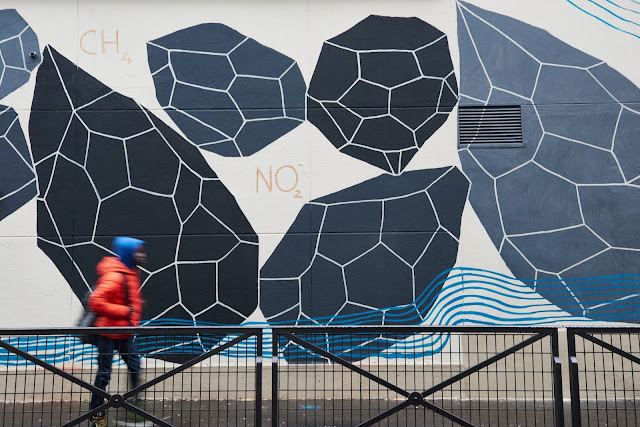 Our friend Andreco just launched CLIMATE 01, an itinerant and international public art project about climate changes, their causes and their impacts.
As the starting point of this journey, Paris is the scene of a two-acts creation. The first project is the installation of a 5meters-tall wooden sculpture in the Jardin partagé Beaudelire, a community garden located in an empty lot of Rue Baudelique in the 18th district. The second stage of this project is a brand new mural that represent the water and CO2 cycles. This mural can be seen on the façade of Richomme Primary School, in the 18th district, in the very heart of the historical and multiethnic neighborhood known as "La Goutte d'Or".
Take a look at more images after the break and as usual stick with your friends at StreetArtNews for the latest updates from Europe.

"Kiss Of Death", a piece by E. LEE in Chicago 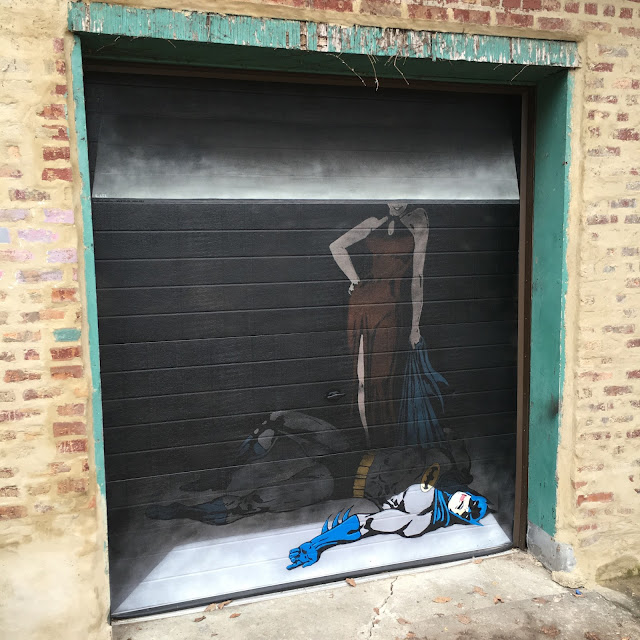 E.LEE's work challenges the way we define our popular culture. His current Superhero Series captures our childhood heroes during their most vulnerable moments. Stripping the context from iconic comic book scenes, each superhero's story is reduced down to a raw emotion painted on the streets.
After a few hours of work, the talented artist finished working on this super cool piece entitled "Kiss Of Death" which is showing one of our favorite heroes Batman.
Continue reading for more detailed images on this artwork and if you are in the area, you'll be able to find it on the southeast side of Lincoln and Diversey, in the alley behind Atlas Brewing and the Mini Cooper dealership.

Farid Rueda just took a quick trip in Colombia to visit Bogota where he was able to work his magic on a new piece.
Entitled "Remember", the piece talks about the military repression towards the local indigenous tribes. The Mexican artist paint two animals that symbolically represents the struggle. The eagle is the oppressor that forces people to live in poverty while the rats are struggling to stay alive.
Take a look at more images after the break and check back with us soon to discover more artworks from Farid Rueda. 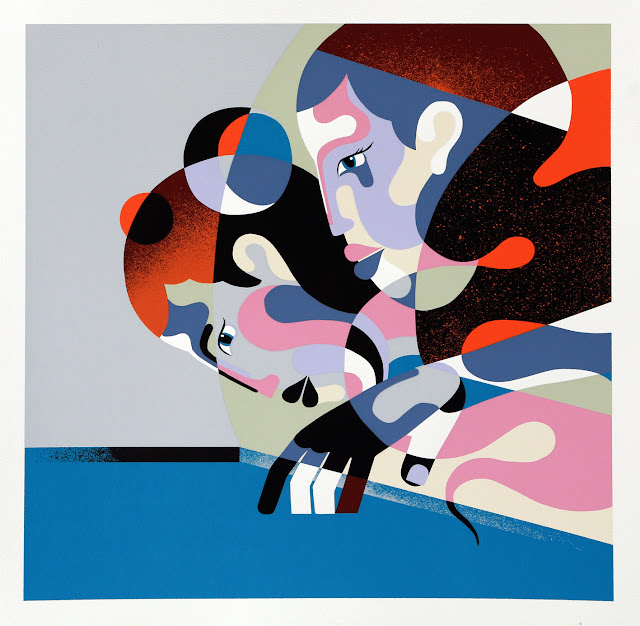 Our friend REKA first started as a graffiti artist in the 1990s, moving to street art including large murals later. He has already exhibited his work in many countries, in Denmark, France or the United States, and created many murals across the world, from Australia to Canada through London, New York, Berlin or Milan. His work is inspired by cubism, art deco, modern art, but also the aesthetics of ancient Greece.
"Luna Eclipse" was produced during his artist residency with Mission To Art and Street Alps, a project that brings an eclectic line-up of painters to the city of Turin to work on various murals and produce an exclusive print. The proceeds of this release will be used to fund this unique artistic program.
This brand new edition is a super limited run of 35, it measures 50 x 50cm, ten layer hand pulled screen print on 300Gr Hahnemühle paper. The print comes signed and numbered by the popular Australian artist.
"Luna Eclipse" will be exclusively available via the StreetArtNews' store on Thursday, November 26th at 5PM UK for £175 each.
Read The Full Story »
Posted by Unknown at 4:11:00 PM No comments: